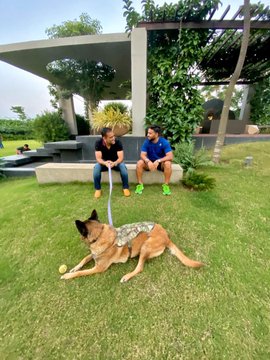 Rishabh Pant, the young wicket-keeper batsman was spotted at the home of former India captain Mahendra Singh Dhoni in Ranchi. Pant’s performance has been under the scanner in the recent while as he has failed to convert starts into big scores. Despite this, the selectors have given him a chance in the series against Bangladesh. Rishabh Pant has shared some pictures on his social media account, in which he is seen sitting and talking with Dhoni at his residence.

Whenever Pant gets an opportunity, he tries to learn something from Dhoni. The latest pictures are of Dhoni’s farm house where Rishabh and former captain was accompanied by a dog.

Dhoni to return only for his farewell game

According to a report published in DNA, Dhoni will never be selected in Team India’s national team. He will be selected in the national team only when he plays his farewell match. However, earlier there were also reports that Dhoni might return to the field from the series against West Indies in December or New Zealand in January 2020.

Team India selection committee chairman MSK Prasad made it clear on Thursday that he had started thinking ahead of Dhoni. He now intends to give Rishabh Pant a longer run to prepare himself for upcoming challenges. He said on Thursday that Mahendra Singh Dhoni also agreed with the decision of the selectors to provide opportunities to the youth. Dhoni has kept himself unavailable for selection since the 50-over World Cup. Its worth mentioning that the selection committee has included Sanju Samson in the T20 team along with Pant for the Bangladesh T20 series.

With Virat Kohli rested, it will be interesting to see if the team management will play both the wicket-keeper batsman in the team. Pant has allready been given enough chances and if Samson manages to impress, the Delhi lad may be sidelined for the upcoming series against West Indies. Samson was rewarded a place in the team after his blistering double century in the ongoing Vijay Hazare trophy, playing for Kerala against Goa.