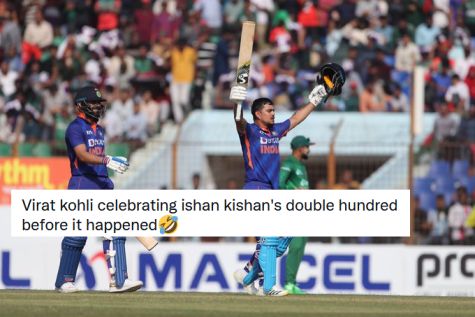 Someone’s misery is another one’s opportunity, well if you still doubt it you have to see the example of Ishan Kishan, who replaced injured Rohit Sharma in the team and thrashed the Bangladeshi bowlers to score 210 runs off just 131 balls. In a dead rubber, where Bangladesh came into the game with a 1-0 lead, Kishan got a chance after last playing an innings of 93 runs in an ODI against South Africa at Ranchi and with the big boys getting back, Kishan had to wait for his chances and it finally arrived on Saturday in the 3rd ODI against Bangladesh at Chattogram.

Opening the batting for India alongside veteran Shikhar Dhawan, Kishan showed aggressive intent right from the word go. He got set and just increased his strike rate thereafter to quickly score a ton off just 85 balls and took just 46 balls thereafter to score 110 more runs and became the 7th batsman in the world to score a double hundred. He is the fourth Indian player to achieve the feat after Sachin Tendulkar, Virender Sehwag and Rohit Sharma.

Here are best reactions and memes-

Ishan Kishan hitting a boundary after 193 to avoid 194 when dravid is there pic.twitter.com/jv4Je06ujO

That’s the way to do it. Brilliant from Ishan Kishan. This is the approach that will do Team India a world of good. #INDvsBAN pic.twitter.com/PepchFwFF1

LPL 2022 Live streaming, where to watch on TV around the world