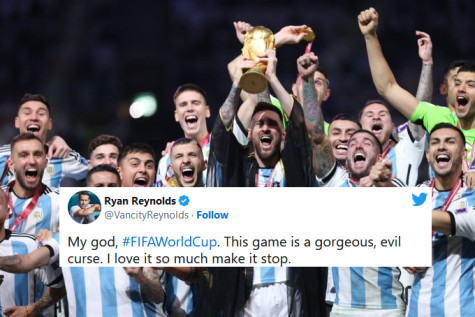 Argentina were crowned FIFA World Cup 2022 in what has been a befitting end to Lionel Messi’s world cup journey with finally a world cup trophy. The PSG striker came close to winning the 2014 world cup but Germany broke the dreams but it was not to be on Sunday evening as Argentina thumped defending champions France in penalties 4-2 after the match was even stevens at 3-3 after the end of full time.

Argentina went with Angel Di Maria who didn’t get any chances in the world cup but the experienced man scored for the Copa America champions and alongside Lionel Messi to put Argentina 2-0 up in the match. At the cusp of victory, the Messi led team conceded two goals within 97 seconds to Kylian Mbappe to find themselves at no goal advantage heading into the dying moments of the game.

The game went into extra time and Messi again found the net but a defensive lap by the Argentina courtesy a hand ball in the circle meant that Mbappe scored on penalty to bring it down to 3-3 in the dying moments of extra time. The score board remained the same and the game went into penalties where Argentine goalkeeper Emiliano Martinez saved two that proved decisive and the Messi led team became the first South American team in 20 years to bring the world cup to their continent.

Here are the best reactions-

The best ever 🐐 #FIFAWorldCup pic.twitter.com/KxT1Sr8N15

He put the ball four times past the goalkeeper and still ended up on the losing side, such was the quality of the game.

The greatest matches are those where, when one champion lifts the trophy, another watches him do so. Take a bow, Mbappé. #FIFAWorldCup pic.twitter.com/F7TXVvVhhZ

My god, #FIFAWorldCup. This game is a gorgeous, evil curse. I love it so much make it stop.

An Indian got the first touch at FIFA World Cup trophy, know how